It has been a long time between drinks, so to speak – my apologies on the delays in posting reviews! A month or so of either being very busy, or being sick, left me with little motivation to write reviews. The reading continued unabated, of course (except for one week of ‘ick’).

So, without further ado, let us resume our perusals of high and low literature. 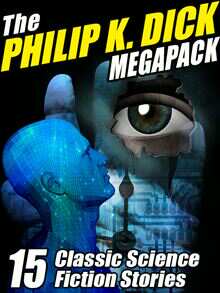 Philip K. Dick was the creator of science fiction short stories and novels which have been adapted into some of the great classics (and flops, let’s admit) of science fiction cinema. Bladerunner; Total Recall; Minority Report; The Adjustment Bureau; Paycheck; A Scanner Darkly and even the Terminator series of android assassins was inspired by the humanoid killing machines portrayed in the short story ‘Second Variety’.

This so-called megapack (the first in a series of about # megapacks; Dick was a prolific author) features a collection of fifteen of Dick’s short stories.

Dystopian futures, alien invasions, machine-rebellions, interspecies cultural conflict and robotic evolution are all featured. The range is broad, and there is even a brief touch of classical mythology in one story, ‘Strange Eden’.

A feature of Dick’s short stories is that nearly all of them seem to possess a ‘sting in the tail’, upon which the entire story turns, like a fish just realising it has been hooked. They are largely brilliantly imaginative and original.

Some favourites from this collection:

‘The Defenders’ – in which humanity has fled underground, leaving robots to fight for the mastery of Earth, with unexpected results. Possibly my favourite, possibly because it has a happy ending.

‘Second Variety’ – a chilling account of robotic evolution, with the machines following the same patterns of competition and conflict as the masters.

‘The Hanging Stranger’ – an almost 1984 flavour to the story, as though an intelligent, omniscient virus has infected your family and friends, and is using society to trap you.

Dick’s style is spare and almost journalistic; the stories mirror the Cold War preoccupations of the time, each story thrumming with an ominous sense that someone had started the countdown to annihilation.

If you read only one of these stories, let it be ‘Second Variety’.