It has been a long time between drinks, so to speak – my apologies on the delays in posting reviews! A month or so of either being very busy, or being sick, left me with little motivation to write reviews. The reading continued unabated, of course (except for one week of ‘ick’).

So, without further ado, let us resume our perusals of high and low literature.

Philip K. Dick was the creator of science fiction short stories and novels which have been adapted into some of the great classics (and flops, let’s admit) of science fiction cinema. Bladerunner; Total Recall; Minority Report; The Adjustment Bureau; Paycheck; A Scanner Darkly and even the Terminator series of android assassins was inspired by the humanoid killing machines portrayed in the short story ‘Second Variety’.

This so-called megapack (the first in a series of about # megapacks; Dick was a prolific author) features a collection of fifteen of Dick’s short stories.

Dystopian futures, alien invasions, machine-rebellions, interspecies cultural conflict and robotic evolution are all featured. The range is broad, and there is even a brief touch of classical mythology in one story, ‘Strange Eden’.

A feature of Dick’s short stories is that nearly all of them seem to possess a ‘sting in the tail’, upon which the entire story turns, like a fish just realising it has been hooked. They are largely brilliantly imaginative and original.

Some favourites from this collection:

‘The Defenders’ – in which humanity has fled underground, leaving robots to fight for the mastery of Earth, with unexpected results. Possibly my favourite, possibly because it has a happy ending.

‘Second Variety’ – a chilling account of robotic evolution, with the machines following the same patterns of competition and conflict as the masters.

‘The Hanging Stranger’ – an almost 1984 flavour to the story, as though an intelligent, omniscient virus has infected your family and friends, and is using society to trap you.

Dick’s style is spare and almost journalistic; the stories mirror the Cold War preoccupations of the time, each story thrumming with an ominous sense that someone had started the countdown to annihilation.

If you read only one of these stories, let it be ‘Second Variety’.

A delightful lark. Fourteen-year-old Sophronia Angelina Temminnick has driven her mother to the end of her manicured wits.

After an unfortunate incident involveing a sabotaged dumbwaiter, a plate of trifle, Mrs. Barnaclegoose’s head, and of course, Sophronia as Exibit A, The Condemned, she is packed off to Mademoiselle Geraldine’s Finishing Academy for Young Ladies of Quality.

It is not the fate worse than death that Sophronia expects. Firstly, the Academy is a vast dirigible which floats its way across the moors of Dartmouth, rather than being sensibly anchored to the ground, and secondly, its students learn not merely the arts of flirtation, dance and household management, but also espionage and assassination. Their shadowy agents have been watching Sophronia for some time, and her predilection for investigation and chaos have resulted in her becoming covertly recruited to join the academy.

The normal pace of lessons aboard the flying academy is somewhat unhinged when Sophronia arrives, accompanied by resident mean-girl, the beautiful Monique de Pelouse. Partnering up with Dimity, who brother Pillover is in training to become an evil genius, Sophronia must discover what Monique is hiding from the Academy, before her actions ensure its destruction by dastardly Picklemen, who will stop at nothing to obtain The Prototype.

Set in a Steampunk 1800’s England, Etiquette & Espionage is fun, well-paced, with interesting and lively characters. The references to ladylike behaviour and dress seem to be refreshingly tongue-in-cheek, and Sophronia’s chracter is intelligent, curious, and shows no qualms about breaking stuffy rules to achieve her goals.

I look forward to reading the sequel when it comes out.

K.L gives Etiquette & Espionage 3.5 out of 5 werewolves in top-hats. 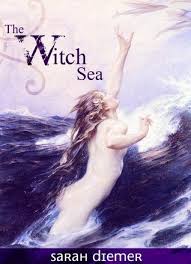 A lesbian short story, about a young woman tasked by her mother and grandmother with keeping an ancient and malevolant sea god chained on land, to prevent him from destroying humanity.

The sea god keeps sending emissaries to plead for his freedom, sea creatures who have been transformed into humans. Once an animal breaches the barrier between him and the ocean, it is transformed into a human being to keep him company in exile. Each night, they make their way to the edge of the bay, and stare out longingly at the ocean that Meriel and her maternal line have denied them.
Eventually the protagonist, Meriel, falls in love with one of the emissaries, a shapeshifted seal named Nor, and questions her role in imprisoning the god and his minions, who suffer continually because of her actions.

Ultimately, it failed to attract and maintain enthusiasm I felt for the premise. I felt like the backstory could have been fleshed out more fully; that it did not, lost The Witch Sea an opportunity to develop interest and depth. There were large logical holes – if the witches were so powerful as to deny a god his freedom, why were they living in poverty and solitude in a lighthouse on a tiny island? Surely they could think of better things to do? As the only human around, constantly casting magic to keep the god chained, where did Meriel obtain food and necessities?

K.L gives The Witch Sea 1 out of 5 fish trapped in bowls.

Meriel eventually sets the sea god free, watching her love transform and leave her forever. The lack of structure to the tale makes me wonder: what does she do next? There is no future hinted at here, and no future direction provided without the context of a town full of imprisoned people.

Picoult specialises in moral dilemmas, which can at times become irksomely repetitive (every book has another life-challenging question that characters must address and act upon).
The Storyteller, however, tweaked my interest by involving two things:
1. Euthanasia, and
2. Nazi war criminals

Being a fan of books and movies like The Boys from Brazil and Apt Pupil, I jumped wholeheartedly into The Storyteller, and was rewarded with vivid characters well expressed. I enjoyed it, and the realism that throbbed in every word.
One unfortunate occurrence is that Picoult seems to be deviating down the path of many modern Dean Koontz novels, and trying (it seems) a little too hard to create quirky, “fiction stranger than truth” type characters. Each one is just a little too individual, from the ex-nun who has visions of God and has established a spiritual haven for day-trippers, to the barista who speaks only in Haiku, and the Department of Justice representative who only listens to 8-track music, and appears partially stuck in the 1950’s.
The novel progressed with pace, aplomb and riveting interesting maintained by the stories-within-stories which were featured. An enjoyable, easy read.

K.L gives The Storyteller 4 out of 5 war criminal arrest warrants.

Ultimately however, I had an ethical objection to the main character Sage’s actions. She managed to turn an ethical and legal issue, that of the right to die, into an act of revenge.
I hesitate to say petty revenge, as it was a Nazi war criminal, but—no, it was petty, and personal, which robbed the novel of the entire objective it had been building towards: trying to get Jacob to incriminate himself enough for extradition and trial.