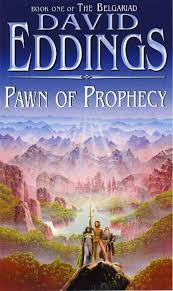 Attending a fairly restrictive religious school in my youth meant there were few options for good, fantasy escapist literature, and Narnia and Lord of the Rings were the status quo for fantasy, with their clear delineation of good versus evil.

Imagine then, my glee at finding the oasis that was Pawn of Prophecy in this barren landscape, and my subsequent devouring of the series which followed. Of course, we all know that revisiting the loves of one’s childhood can be disastrous… but this is what I have done.

Pawn of Prophecy is a fairly stock standard heroic quest. Garion, feckless farm boy, departs on a journey fraught with perils accompanied by a grocery list of character tropes gathered from across a series of quasi-medieval kingdoms, in order to reclaim the One Ring (sorry, sorry, the Orb of Aldur), and battle the one-eyed, crippled god Sauron (apologies, it’s Torak), and reclaim his ancient, hereditary kingdom as King Aragorn (my mistake, King Garion).

Which is a fine, time-honoured storyline, if unfortunate that most of his subsequent novels follow the exact same format.

Where the novel deviates from default narrative (historical) sexism (and more here) to achieve actively pursued sexism is in its portrayal of female characters.

Garion’s Aunt Pol, who works in the kitchens of the farm where he grows up, is beautiful and regal, with permanently soft, white hands (apparently a side effect of daily hard kitchen labour. Who knew). Fulfilling the Trinity character trope, she is an incredibly powerful, autocratic commander, obeyed by all she meets – unless they are men and decide to ignore her, at which point she… does nothing. Usually, Aunt Pol simply glares and retreats from the field of battle, uttering a comment as she goes. Acidly. It’s a recurring descriptor. Her bossiness and vengeful punishments are a subject of much mirth amongst the rest of the Fellowship of the Ring (sorry. The quest group as it consists of all other men).

Meanwhile, other female characters are either seductive minxes, out to entrap the young hero with fecundity; baby-obsessed breeders who infantilize their husbands, allowable in this context by the man himself not being masculine enough to warrant anyone’s respect; coldly dutiful wives who hate their husbands but endure marital rape as their husband’s due; the occasional repulsive ancient witch, who gets her comeuppance; or enthusiastic-yet-barren wives, who desperately want to prove their love by popping out babies.

It is a horribly simplistic worldview – there is literally no occupation for women in this world other than wife, cook, or professionally chaste mystic, who is also (in one case) a cook, and later becomes a wife. Insulting, but it gets worse when one considers that these tropes are applied to literally one of the most powerful human beings on the planet. Aunt Pol (Polgara the Sorceress, daughter of Belgarath the Sorcerer and mumble-mumble-cough) can remake the fabric of reality on a whim, yet is dependant upon a grumbling, entitled boy to save the day because Prophecy.

The laws of physics? Conservation of matter? What laws? Polgara can create matter from nothing, transform herself, read minds and is effectively immortal, yet her narrative contribution consists of raising and nurturing the hero, and she is recognised mainly for her awe-inspiring beauty… and her fantastic cooking ability.

And literally, all these Bechdel-test-failing female characters do when they get together alone is to talk about Garion, men and babies – and their menfolk, in turn, assume they are simply discussing clothes and hair, in the midst of crises of end-of-the-universe proportions.

This is all even more disappointing when you discover that Lee Eddings, David Eddings’ wife, is coauthor or consultant on all his works. Clearly the Edding duo subscribe to the belief that Simone de Beauvoir expressed as “Man is the measure of humanity. Woman is other.”

Looking back critically, I can understand how this underwhelming series made it into the rigorously policed library of my adolescence. Its like the patriarchy and Lord of the Rings (no, there’s not a difference, aside of the deniability of Lord of the Rings being a product of its time) had a child made of narrative sexism and pseudo-plagiarism. And I say that with the full knowledge that I’ve written and self-published a mashup.

Some of their ideas are good, and some of the dialogue is witty when it’s not being dismissive and sexist, or describing national identities which border on racist. But the books themselves are overwhelmingly sexist, and so…

…K.L gives Pawn of Prophecy 1 out of 5 hamstrung sorceresses.