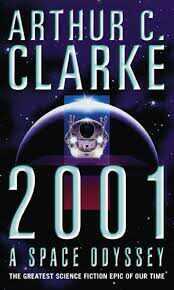 I have never seen 2001: A Space Odyssey. So when my favourite pop culture website (http://www.cracked.com/article_19138_7-hotly-debated-movie-questions-that-totally-have-answers_p2.html)mentioned the movie in one of their articles, I decided to take the book for a spin.

The first thing one should know, is that the book 2001: A Space Odyssey, was written and published in 1969, subsequent to the movie, which was released in 1968. In past experience, this is nearly always a warning sign as to the quality of the novel (the novel Gladiator, for instance, was simply the movie with a few deleted scenes added in, and some fairly pedestrian descriptions tacked on. Ditto for The Ghost and The Darkness).

Unfortunately, 2001: A Space Odyssey was no exception to the rule (if you can recommend any books which are, please let me know). I am still keen to see the movie, because I think that some of the pacing and events were probably framed with the visual medium in mind, but I cannot recommend the book at all. Which makes me feel a little bad, seeing as it was written by Arthur C. Clarke, a renowned Sci-Fi author, amongst other things. The writing felt not only formulaic (possibly due to many post-2001 imitations which I encountered in advance of the original), but also dense, the narrative failing to flow.

One interesting idea expressed was that HAL malfunctioned in the violent way that it did, because its construction and intelligence development had left it unable to practice deception. The burden of knowing the ship’s true mission, and knowing that its human companions were completely ignorant, caused HAL to experience a cascading series of malfunctions in its programming, culminating in its’ attempt to sever all contact with Earth and kill the crew-members.

K.L gives 2001: A Space Odyssey 0 out of 5 homicidal robots unable to deal with deception.