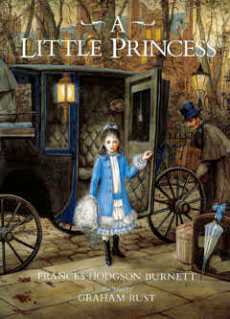 Has anyone watched the Shirley Temple movie by the same name? I have dim recollections of it, and following my recent read of the novel, an increased desire to see it again. In A Little Princess, Sara is sent over to England from her birth-country of India by her widower father, the wealthy Captain Crewe. Enrolled in a highly-selective private school for girls of all ages, Sara is treated to all the excesses of privilege that her father’s substantial fortune can afford – until he errs in funding an old school friend’s attempt to start a diamond mine, and falls first into bankruptcy, thereafter into sickness and death.

Sara learns that she has become a pauper when the unlovable Miss Minchin, the headmistress who privately envies her inscrutable, creative, first-class student, brings the girl’s eleventh birthday festivities to a crashing halt with the news that she is both penniless, and an orphan. Due to the bad press which throwing the girl onto the streets might incur, Miss Minchin keeps Sara on in reduced circumstances, as an overworked and underfed drab, running errands and tutoring the younger students.

The character of Sara is enjoyable to read: she is imaginative, gravely thoughtful and rises above the petty politicking of her environment, whilst still carrying on a rich inner life full of the real and reasonable emotions of a child caught in misfortune. Her inevitable rise from obscurity is a much-anticipated, enjoyable event, with a ripe sense of things coming full circle. All of the female characters in the novel are fully realised and capable human beings, which I was both pleased and surprised to observe in a book of its time period; possibly this is due to the relative dearth of male characters for most of the novel. There are no female puppets in the story.

There were a few points which detracted from my enjoyment of the story – these are so clearly the relatively minor sufferings of a privileged member of society, when seen against the backdrop of the homeless, starving poor in Industrial-era London – that I couldn’t quite empathize with Sara. She still had a roof over her head, could work for food and had the prospect of becoming an underpaid teacher in the school when she grew up. Despite how unpleasant this is described as being, she still had prospects, more than many people had.

I must confess to disappointment in the treatment of other, more unfortunate children in the story, such as Becky, a street-waif turned scullery-maid in the school. When the mysterious ‘Indian Gentleman’ (a white man who lived in India; he is not Indian himself) moves into the building next door, Sara makes friends with his Indian manservant following the escape of a monkey. The manservant reports on her sad existence in the attic to his employer, who feels a deep sympathy for the child’s suffering. Over the course of a night, some of the servants transform her leaky, cold attic into a haven of warmth, comfort and luxury. Sleeping on the other side of the thin wall, Becky’s room, which is just as miserable, and which has been occupied for longer, is untouched. She inherits Sara’s old pillow and blanket, and considers herself in the lap of luxury; possibly this was added by the author to imply that it didn’t matter that Becky did not receive the same largesse, as she clearly lacked the ability to appreciate such things from her underprivileged background. At the end of the story, when Sara’s fortunes are reversed and she becomes a millionaire heiress, her magnanimous gesture towards her former co-drudge and ally is to elevate Becky to the status of Sara’s personal ladies’-maid.

Sara has just become a millionaire and half-owner of a diamond mine, mind you, in pre-war Britain. And the best thing she can think to do for Becky is to offer her work as a maid. Not an education: a job, with few future prospects, which depends upon Becky’s ability to remain agreeable and subservient. A little embittering, though, of course, she is thrilled with her ‘levelling up’ in the game of life.

In summary, I definitely enjoyed A Little Princess and would read it again, but certain elements within it are a little disappointing, and show it to be a somewhat classist product of its time (back in the ancient prehistory of…1905? Sigh).

‘ Sometimes, when she was in the midst of some harsh, domineering speech, Miss Minchin would find the still, unchildish eyes fixed upon her with something like a proud smile in them. At such times she did not know that Sara was saying to herself:

“You don’t know that you are saying these things to a princess, and that if I chose I could wave my hand and order you to execution. I only spare you because I am a princess, and your are a poor, stupid, unkind, vulgar old thing, and don’t know any better.” ’

K.L. Gives A Little Princess 3 out of 5 diamond encrusted monkeys.