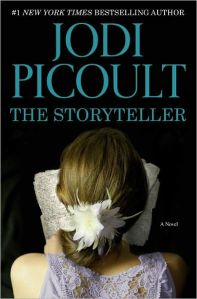 Picoult specialises in moral dilemmas, which can at times become irksomely repetitive (every book has another life-challenging question that characters must address and act upon).
The Storyteller, however, tweaked my interest by involving two things:
1. Euthanasia, and
2. Nazi war criminals

Being a fan of books and movies like The Boys from Brazil and Apt Pupil, I jumped wholeheartedly into The Storyteller, and was rewarded with vivid characters well expressed. I enjoyed it, and the realism that throbbed in every word.
One unfortunate occurrence is that Picoult seems to be deviating down the path of many modern Dean Koontz novels, and trying (it seems) a little too hard to create quirky, “fiction stranger than truth” type characters. Each one is just a little too individual, from the ex-nun who has visions of God and has established a spiritual haven for day-trippers, to the barista who speaks only in Haiku, and the Department of Justice representative who only listens to 8-track music, and appears partially stuck in the 1950’s.
The novel progressed with pace, aplomb and riveting interesting maintained by the stories-within-stories which were featured. An enjoyable, easy read.

K.L gives The Storyteller 4 out of 5 war criminal arrest warrants.

Ultimately however, I had an ethical objection to the main character Sage’s actions. She managed to turn an ethical and legal issue, that of the right to die, into an act of revenge.
I hesitate to say petty revenge, as it was a Nazi war criminal, but—no, it was petty, and personal, which robbed the novel of the entire objective it had been building towards: trying to get Jacob to incriminate himself enough for extradition and trial.